Finished setting up for Maker Faire tomorrow. So tie tie!

We cut the tigerwood for the clock last night, here’s a photo of the three pieces together: 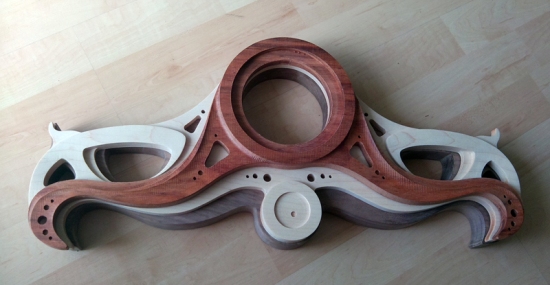 Spring is here, the sun is shining and I’m working in the shop! Life is good.
We’re starting to gear up for Vancouver Maker Faire 2012. First project to finish off – the Fox and Raven pub sign! This one has been sitting on my work bench for far too long.
I finally started the painting this week. Here’s the progress so far: 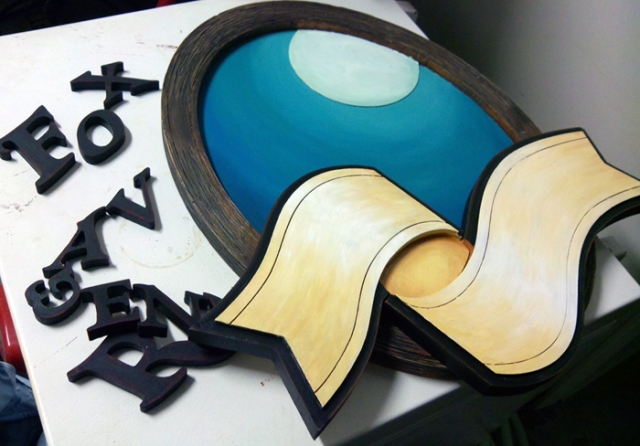 You may notice a sign making beginners mistake (I’ve made several) painting before gluing on the letters. I thought it would be easier to paint this way but now I’m wondering how the hell I’ll get the letters to stick.

Firstly, I would like to apologize for the lack in updates over the past 2 months.
Sorry to keep you all on the edge of your seats, you may now resume normal seat position.
Couldn’t be helped.
We’ve only recently recovered from Vancouver’s first Maker Faire that took place this year on June 25th to 26th.
It’s taken this long to dig ourselves out of the disaster zone that we call our workshop and get things reorganized, or, as the term organized didn’t apply to begin with, how about we just say organized.

Vancouver Maker Faire was fantastically successful with nearly 100 exhibitors and over 7000 attendees. After four months of fast paced making, Derek and I managed to pull off our projects! Yay! In total, making a display, backlit sign, upholstered bench, 2 bookcases and many other smaller projects.
It was great to see family and friends and many familiar, friendly faces at the event.
We brought along our mini CNC Andre to the event to demonstrate how a CNC works and talked about how we made the large projects on Big Ben our big CNC.

So what’s planned for next year? Lots of course. As usual, far more than is entirely reasonable.

Derek has a new toy in the basement which is why he hasn’t seen daylight in the past 2 weeks.
It’s a 3D printer. He’s just finishing up the building of it this weekend.

I’m working on several new designs, clocks, furniture, pub signs etc. We will post more photos soon!
Derek will also be posting about the building of the 3D printer as soon as I can draw him out of the basement, blinking into the sunlight, following my carefully placed trail of electronics parts.
He’s currently fairly non-responsive to vocal prompts.
I check on him once in a while, feed him, check to see that he isn’t setting anything on fire, that sort of thing.
However, there is a burgeoning feeling of excitement in the air, and I feel the printer’s completion is imminent, which means we should be 3D printing in the next few days or so.

Until then, check out a few photos of our display at the event…

Derek with Andre our mini CNC:

I’m getting super excited for this weekend. There are so many makers projects that I want to see. There will be a woman teaching workshops on how to make bacon from scratch! Mondo Spider and Panterragaffe will be there.
Any conference that requires all visitors to sign a waiver before they’re granted entry (seriously) is pretty awesome in my books.
Only 2 more sleeps to go!
Speaking of sleep, I’ve been having strange dreams lately. I dreamt last night that I was being ticketed for Scottish dancing without a permit.
I didn’t know I could Scottish dance.

Vancouver Maker Faire is this weekend! It’s the very first one in Vancouver so make history and be there!
Get your tickets here:
http://www.makerfaire.ca/
Derek and I are putting the final touches on our projects. We actually finished everything! Amazing!
Here’s a pic of the brass octopusses/pi on the bench arms. We added these this week.

We’ve put a grainy video up of the project set up in our living room.

Everything designed and built by us in 3 months. So tie-tie.

Maker Faire is next weekend so get your tickets soon!

…has pretty much been the sound track to our lives for the past 4 months. Check out our Flight of the Bumble Bee video here:

This video will be playing in “ContainR” at Maker Faire.
It’s next weekend folks, step right up and get your tickets!
It’s only a 2 day event and there are a limited number of tickets.

Only four more weekends left before Maker Faire. Four more weekends and still so much to do. No more time for slacking off.
Curiously, I feel no sense of panic. Just the calm before the storm. More of a … fuzzy mellow blissfulness.
Come to think of it, that may have something to do with the nearly empty pint glass in front of me.
“Nah. Probably not. Probably just my deep rooted confidence in our general awesomeness.” I tell myself as I quaff my pint of liquid courage.
Seriously, I’m getting really excited. Progress is actually going very well – the bench bookcase combo is almost finished.
I designed a mockup of what our booth will look like in my imagination. So if it doesn’t end up looking anything like this, at least you will know that I imagined it would be cool. And that’s almost as good. Here is the image of the mock up in the gallery but it’s too small to read the writing:
Projects Gallery Image
You probably shouldn’t read the writing anyway because it’s got a bit of my crazy showing, but here it is larger anyway.
Crazy Close Up Image
We will have LED track lighting in various locations, such as behind the sign and behind the bench and bookcases.
I’ll post more photos of everything soon, but not now. I’m feeling far too lazy now. After two solid days of sanding all I want to do now is have a bubble bath and a cup of tea.
So the photos will have to wait.
PS As you can see I have usurped Derek’s blog name for our new CNC company. It’s a cool name and I like it! We shall be relocating his blog to http://www.armyofevilrobots.com/dereksbloginthefurnaceroom . But don’t feel sorry for him. I’ve bought him a new red stapler.

We’ve sent our info and photos in for the Maker Faire website today!
Check out the website here:
http://www.makerfaire.ca/
Progress on our projects is actually occurring. Don’t look so surprised!
I’ve posted several new photos in the projects gallery. The bench is now half done, next are the bookcases.
View larger photos…

It’s true! Vancouver is holding it’s own Maker Faire in June 2011!
For anyone reading who isn’t familiar with Maker Faire, it’s the ultimate DIY festival – a combination conference and trade show for Makers of all ages.
Check out the Vancouver Maker Faire website:
http://www.makerfaire.ca/
With reckless spontaneity and enthusiasm, we registered and paid our hundred bucks for a 10 ft x 10 ft space! We are now officially Maker Faire Presenters! How exciting!
Moments after this transaction was made, came the dawning realization that this meant we would probably now have to make something. It is a Maker Faire afterall. The presenters are generally expected to make things.
We haven’t got that part entirely planned yet folks, but don’t panic! Whatever it is, it will be sure to amaze and astound!
And it’s probably going to involve a CNC machine that we just happen to have down in our basement. Handy no?
The CNC machine was our present to each other this past Christmas. Derek built it while I sipped spiked eggnog, regularly voicing my unsolicited opinion about his methods from the comfort of a squashy chair.
You can see already what a great team we make. This is gonna be AWESOME!
We have made a few small projects with it so far. Check out the photos of the globe in the Maker Faire project gallery.
Our current project is a doozy and we’re hoping to have it ready for the Faire along with many other projects. I’ll be posting all our progress photos in the Maker Faire Project gallery. I’ve got one in there of the first piece we finished cutting today for the big project.
I shall be making regular blog posts about our progress, or lack of progress, whatever the case may be, over the next 3 months.
Seriously, the lack of planning and direction not to mention time, makes this whole thing so much more thrilling don’t you think?
Will we make it? Who’s to know? Stay tuned for the exciting next chapter…